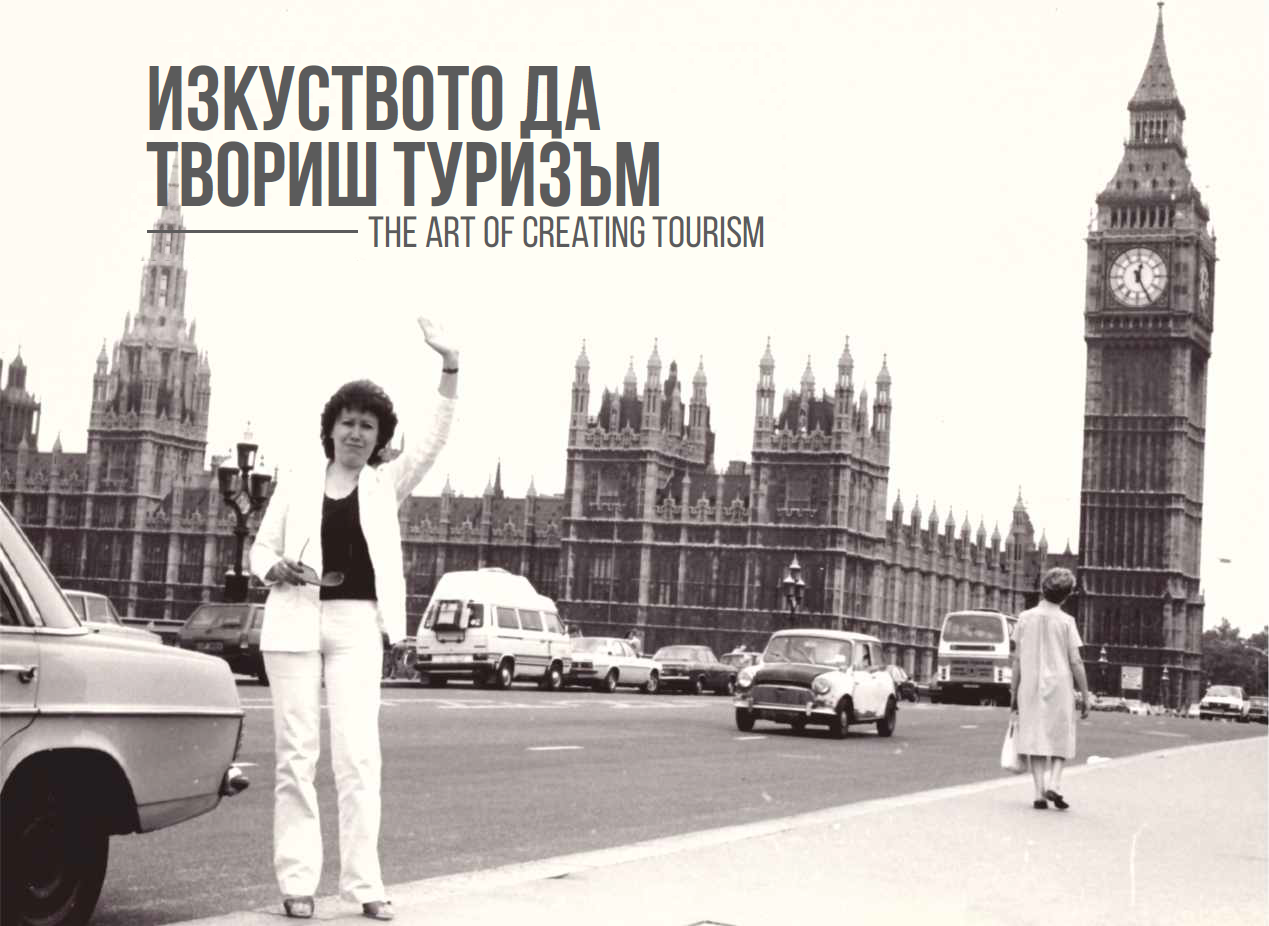 The art of creating tourism

I succeed, because I have always dreamed big, says the lady who has seen it all in our country’s business

Everything a person does with their whole heart and manages to master perfectly turns into art. This saying has stood the test of time and fits like a glove on one of the grand dames of Bulgarian tourism, Biserka Ognyanova. Now, she is the driving force of the Holiday and Spa Expo fair, but her love story with Bulgarian tourism started five decades ago.

“In the distant year 1970, by chance or by destiny, I started working as an artist at the State tourism committee, Center for tourist propaganda and advertisement, and later at the advertisement agency for tourism – Turistreklama,” recalls Biserka Ognqnova. “I was involved in consulting and projects for visual communication of hotels and complexes, trademarks, printed media and various advertising materials. In those years, there was great enthusiasm and a lot of work in tourism. Later, I started creating projects for fair booths, and this became my passion. I would design Bulgaria’s participation in International tourist fairs. And kept doing that for 35 years.”

In the years of socialism, it was not at all easy to attract foreign tourists to Bulgaria. There were a number of difficulties which needed to be overcome, so that people from beyond the “iron curtain” could also discover our country’s beauty and come back again.

“Under the communism, our dreams were big, too, and Bulgaria was advertised as a one-stop tourist destination – sea, mountains, cultural tourism,” tells Ognyanova. “Our folklore troupes would set the audience on fire everywhere around the world, and tasting of Bulgarian yogurt and wine attracted the crowds. Over the years, the concept and design of Bulgarian participation in various fairs developed. We have constructed a traditional wooden Bulgarian house with a yard, chardak, and cobblestone paths, later modular constructions gained prominence, and then we went back to monolithic booths constructed from various materials, with contemporary visual effects and design.

“Bulgaria had tourist representation offices in many countries around the world which hosted a large part of the advertisement events, as part of the development strategy for tourism. I would decorate the interior and facades of a large part of them. After the changes, they were unfortunately shut down.”

But Biserka Ognyanova is not one to give up. So she managed to successfully navigate the difficulties of Bulgarian transition to market economy. Her tremendous experience helped her in this. She has participated in thousands of national and international fairs. London, Madrid, Moscow, Paris, Tokyo, Athens… these are just some of the worldwide capitals where her work was appreciated at the highest level.

“I have designed over 1,000 advertising booths, National pavilions in some of the largest exhibition centers,” says Ognyanova, “but my first exhibition was in a very unusual place – a cathedral in Copenhagen. It was followed by many events in ITB Berlin, WTM London, FITUR Madrid, MIT Moscow, Paris, Tokyo, Lisbon, Milan, Athens, Tehran, Harare, and many others.

“In 1991, at yet another event at FITUR Madrid, I designed Bulgaria’s booth with 12 glass cases exhibiting replicas of valuable monastery ware, a lot of icons, paftas, and other household items. The result was impressive, and Spanish media reported on our participation fittingly. The recipe to perform on a world-class level in this sector is an interesting idea, knowing the specifics of the audience, a good budget, aesthetics, and perfect execution.”

Crisis moments are not lacking either, when it seems that all is lost and about to fail. Even then, obstacles can be overcome by sober judgement and a lot of hard work up to the very last second.

“One of my earliest critical experiences was in 1978,” remembers Ognyanova, “a business trip to Luanda, the capital of Angola. The BCA Balkan line Sofia-Luanda had just been opened and the Balkantourist office and BCA Balkan needed a design. When I arrived, it turned out that the premises I had to work with were just a brick construction and a lot of work needed to be done before getting to the decoration stage. The former Portuguese colony was now a people’s republic, and unfortunately, the first thing local workers had learned was that under socialism, one can eat without working. We managed. I had another interesting experience in 1981, when Bulgaria participated for the first time in the World fair in Kobe, Japan. The pavilions were built on an artificial peninsula near the city in just a few years. The exhibition’s tagline was Man’s victory over nature. Ironically, a powerful earthquake later caused severe damage to this city and the artificial island. We designed the Bulgarian pavilion as a replica of a Revival-era room, with a carved ceiling, huge colored windows with 12 sites from Bulgaria and furniture from tree trunks with unique deep carving with flower motifs and birds made by a Preslav wood-carving artist. We were working together with a colleague architect according to measurements of the space sent by the exhibition. It turned out that the exhibition had made a serious error and the hall was not as high as we were told. We had to adjust the details on site, but because of the different voltage, we could only use hand tools. Our Japanese colleagues helped, but asked us to leave a hoe, a hand plane, a hammer, a saw as a memento, as these tools were no longer used in their country. Moving with the times, already then as we landed on the Narita airport in Tokyo, we noticed that most people were wearing face masks – protecting themselves from viruses.

“It was also very exciting to design and realize Sofia’s pavilion in Lausanne, as a candidate for the winter Olympics in ’92. A fairytale white pavilion showcased the options Sofia and Vitosha provided for holding Olympic games, in the presence of renowned sportsmen. In the booth’s lobby, we exhibited in glass boxes some replicas of the Panagyurishte treasure.

“Besides sports stars, politicians, and representatives of the Olympic movement, the famous actress Gina Lollobrigida was also among the guests of the booth and was very impressed. Well, Sofia did not win, but it was well presented.

“I have also had to deal with other difficult situations when organizing exhibitions. Years ago, a 20-ton truck with exhibition items broke down on the highway en route to Berlin. The entire team waited in vain for the shipment, we had to find other transport, have the entire load transferred while on the autobahn, and the 300 sq. m booth needed to be constructed in one day and one night.

“ITB Berlin will remain one of my favorite exhibitions, with lots of experiences for the entire team, for more than 20 years, since the time of the Berlin wall and afterwards.”

In this entire whirlwind of events following one after another in various places around the world, often separated by tens of thousands of kilometers, Biserka Ognyanova also has her island of tranquility. Her family.

“In all these years, I had the selfless assistance and support of my husband and colleague, who is no longer with us,” says Ognyanova. “We were a professional team, which was also joined by our daughter Vihra, who also graduated from the Academy of Arts. Nowadays, we are an amazing duet with a taste for beauty and a restless creative spirit. We have realized countless projects together: visual communications for the complexes Sunny beach, Elenite, the Samokov and Rila hotels in Borovets, Interhotel Sandanski, logos of many hotels, such as Vitosha New Otani, Samokov, Rila, the Golden Sands complex, the tourist agency Balkan Holidays, Sofia Tourist Region, Holiday and Spa Expo, Aleko SportTour Vitosha, and many, many others, some of which exist to this day. Over the years, I managed to include in my busy schedule another passion of mine – painting. In recent years, it has become a part of my daily life. I have organized several exhibitions and I paint every day.”

Now, Biserka Ognyanova’s connection to tourism and art seems complete. She says that the feeling of beauty she finds in Bulgarian nature reminds her most of the paintings of Vladimir Dimitrov – Maystora. “Any of his masterpieces carries in it the entire loveliness of the motherland,” says Biserka Ognyanova. “In the Bulgarian prominent artists – Ivan Milev, Zlatyu Boyadzhiev Konstantin Shtarkelov – I feel within me the beautiful nature and daily life of our country. I really like the pretty villages, the clean beaches, the green mountains. I love the endless tranquility of the sea, and the astonishing colors of blossoming fields and forests are my permanent source of inspiration. Bulgaria has beautiful nature, and unfortunately, we do not treat it with much care, and I feel offended by this. One of the places I find special is Veliko Tarnovo. I associate this beautiful city with both professional commitments and long-term friendships.”

Biserka Ognyanova graduated from the National Academy of Arts in the specialty of “Poster and applied graphics”, which helped her in her future career.

“The main feature of spatial design is primarily the short duration of the event, the attractiveness and emotional effect on the viewer,” says Ognyanova. “Every exhibition is a combination of economy and design, a strange symbiosis where the important part is not only the country’s vision, but also the presentation of this vision in an original way. This can help draw the attention of the audience and “sell” the destination. “The tourist market in itself is a cultural event and you need to have a cultural attitude to its implementation.”

Even after countless successful professional projects over the years, Biserka Ognyanova does not hesitate to take on new challenges. What are the golden moments of her career?

“For years, a favorite “destination” of mine, each Spring and Autumn, was the Plovdiv fair,” says the grand dame of Bulgarian tourism. “I designed and realized dozens of booths and pavilions of Bulgarian companies. And still, “Holiday and Spa Expo” remains my favorite exhibition.

“I have been involved with it from its first issue in 1983 called “Tourism and recreation exhibition” under the guidance of the State tourism committee. It started in the lobby of the International hotel in the Golden sands resort, then in the Palace of sports – Varna, in the National Palace of Culture – Sofia, and has been held for a few years now in Inter Expo Center, 37 years in total without interruption.

“In the last fifteen years, the exhibition is owned by Prim Expo and is hosted by our company’s amazing team headed by Vihra Ognyanova. A large part of our participants entrusts us not only with the organization, but also the design of the booths. These are tourist agencies, hotels, municipalities, national pavilions. Over the years, the exhibition’s outlook has changed, and we are happy that people are beginning to appreciate the importance of aesthetic presentation more. In the time we find ourselves in now, I only wish for good health and more professional assignments. I do not wish to boast, but I have worked hard and I continue to do so with pleasure.”

Home comfort in the heart of Pamporovo