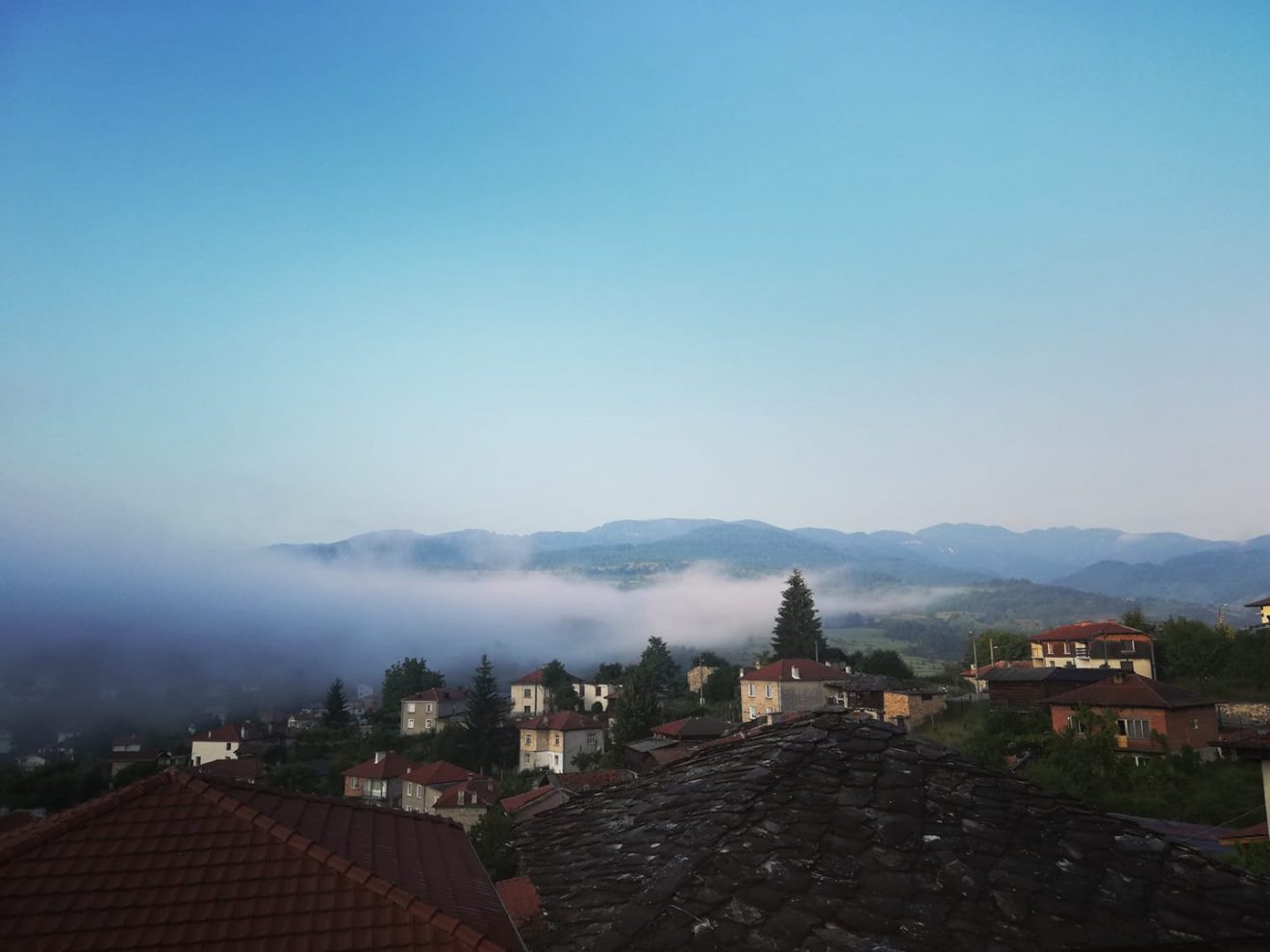 The circumstances and the road we were on as we were leaving the Rhodope mountains led us to the village of Hvoyna. I had not heard about it and it intrigued me, even only because of its name, despite the long road to the flat and spacious Dobrudzha ahead of us. We left the village of Momchilovtsi – a picturesque place with houses shining white on the surrounding slopes, where the taste of raspberries and blackberries is authentic, combining the notes of sour and sweet flavour caressing the palate and the heart, infused with the gentle warmth of the Rhodope sun. A few turns of the road later, we found ourselves in the village of Hvoyna – an exceptionally picturesque place with steep narrow streets, old houses, each keeping stories as diverse as the human world – a place lying quiet and tucked between mountain ranges, where the locals still tell legends, and some of them are even their personal stories. There is a fountain with three taps in the village. In the past, it was surrounded by juniper bushes, which gave the village its name (“hvoyna” is the Bulgarian word for juniper). According to the legend, the tap a young woman drinks from determines where she would marry. If she chooses the middle tap, she would be a bride in the village of Hvoyna. If she chooses one of the other taps, she would marry in one of the nearby neighborhoods. Having drunk from the cold clear water of the fountain, having rested by it, we were on our way, and without realizing, were slowly joined by Milka Karneva. She is one of the locals, known to some in the group. Her presence is modest. She is dressed casually, with rubber slippers. There are no official greetings and introductions. She just gives us all a smile, and naturally becomes a part of the group which has found itself in the village for а little while. She doesn’t leave our side, and listens to each new story with the interest of someone who is touched by it for the first time. It is impossible to come to the Rhodope mountains without hearing a legend about a lost bride, the violence of the oppressors, and the unbreakable spirit which built a chapel after having the building destroyed and erected anew again and again. The chapel exists to this day, and the flames of hope and reverence still flicker in it, and at its foot is a spring with healing water. The personal story of this chapel is linked to one of the families in the village – Prostovi. Ironically, the adjective (“prost” means “simple” in Bulgarian) was associated with the man who rebuilt many times the chapel structure destroyed by the bashi-bazouks.

They could not understand how one could build something again and again after it had been destroyed more than once. The locals’ peculiarities have no end. They exist nowadays too. In the village of Hvoyna, you will find people who have chosen to live in a tiny wooden house together with bees. The wooden house has only one room and it is the second floor above the very hives. According to the host – Nikola Prostov – at night you fall asleep with the buzz of the bees, and his eyes show his delight with this experience. In the morning, the view from the only window shows a vast expanse, framed in the distance by miniature white houses and the soft outlines of mountain ranges. Although it is the end of summer, everything is still green. It feels cozy and warm. At some distance behind this house, which may seem strange to many, is a tall old tree with a great crown. A summer terrace with a wooden table and benches around it has “perched” on its branches.

The hosts happily welcome anyone who wishes to visit the upper floor. It is a place to reflect, to slowly sip the aromatic tea, listen to the silence or paint. Dream all you want… Go wherever you want… Be who you want, because there is only one life and only one chance to do what you want… – a thought by Pippi Longstocking… and so AH! I found myself in the Rhodope village of Hvoyna to find out that you can live together with bees, your office can be “perched” on a tree, you can try an excellent banitsa pie with crusts from Edirne made with lots of love, sip on tea from Rhodope herbs and grasses… and in the end have a part of the group climb to the upper floor of a house in construction to wave us goodbye. I would like to clarify, the word “goodbye” here is used in its traditional meaning – God be with ye! In a place like this, you don’t feel like a tourist in the familiar sense. You are more of a traveler, discoverer, and a happy person. There is no fussing, hurrying, and you feel loved.

SOZOPOL – WHERE STRANDJA KISSES THE SEA

Golden Sands – When a Resort and Nature Park are One

The eternal Kyustendil
Chepelare – The Green Heart of Bulgaria