With its unrivalled beaches, unique scenery, vast golden wheat fields flowing imperceptibly into the sparkling like champagne sea, with its romance and the good-natured people of Dobrudzha, this corner of Bulgaria farthest northeast is the sea pearl in its tourist industry crown. Albena’s discreet charm, as Luis Buñuel would call it, lies in the beauty of nature and the spirit of Dobrudzha, blended in quiet harmony.

It just so happened in my life that I started wandering early in my life. In all directions. Occupation: Reporter, as the famous film of Master Michelangelo Antonioni was called. And to this day, whenever I can, and most of the time, whenever I want, I run away. From Kamchatka to California, from Peru and Argentina to Cape Town, from Sakhalin to Sorrento. But there’s a place in the world I always come back to. Dobrudzha and its magnetic Albena.

The Chinese say it’s better to travel 10,000 miles than to read 10,000 books. Well, maybe it is. I’ve chosen to do both. And I can say that one can learn from everything as long as one has eyes to look at and a heart to fill with what one sees.

The magnet of memory is triggered in every person as soon as a child’s curiosity starts pulling him or her beyond the horizon. Beyond the hill or the mountain. Every one of us with a horse that we urge with a slight tug of the reins. And so until the last breath. In order to return one day back to where one came from. From the children’s paintings painted in one’s memory. But he, or she, has already learnt to compare. And it is quite likely that Albena will lure one stronger than any other beauty on the shores of the seaside.

If you can see with your mind the geographical contours of the United States and Bulgaria, you will easily notice that Albena is where the state of Maine is in America. The Beauty of Dobrudzha is to the north of Varna just like Maine is “upward” from New Hampshire and Massachusetts… The same Massachusetts where 400 years ago settlers from England arrived aboard the Mayflower and built a new country in the New World, discovered by Genoese Columbus. Similarly, not far from the beaches of Albena, more than 1,300 years ago Asparuh arrived with his mounted cavalcade, plunged his sword into the rich Dobrudzha soil and his horsemen remained here forever. But this is probably the only resemblance between Dobrudzha and Maine, between these two north-eastern corners, that are beautiful in different ways. Maine is a mixture of ocean coasts, lakes and mountains; there are also the most delicious lobsters I have eaten, and because of them now my mouth waters as I write these lines. Dobrudzha is a flat and quiet land, calm and with green waves in the field assuming gentle emerald colours near Kaliakra where the land plunges into the sea. That’s where fish and shellfish attract connoisseurs. And in severe winters – homemade sausages accompanied by generous amounts of “Castel” with wild strawberry fragrance from my father’s vineyard. The “Castel” wine today is made by my brother Ivan. I just help him drink it.

If a foreigner or a Bulgarian wants to learn everything about the resort of Albena, almost everything about its history and merits can be found in the Great Book of Google. 570 years after Gutenberg, Google can tell you that Albena is the greenest and most peaceful seaside resort in Bulgaria; it is preferred by tourists who appreciate cosiness, tranquility, safety and a solid international reputation. It is a place for guests of all ages who like to swim in the sea, ride horses, play tennis or golf in the three courses nearby, who know that the food is always fresh and tasty, and that Albena’s economy is “circular” and “green” as World Bank economists say today and in whose analyses you can come upon the name of Albena as an example of how man and nature can thrive in harmony.

The name of this magnetic resort comes from a beautiful story by Yordan Yovkov about an even more beautiful woman from this region called Albena. Anyone who hasn’t read can spare 20 minutes and read it. She, just like the resort, projected attraction… No one could remain indifferent to her beauty. And to add a finishing touch to the picture of local hospitality and kindness, the writer Yordan Yovkov created a “mini Albena” even before the existing resort was built and opened for guests in August 1969. This is the mythical “Inn of Sarandovitsa”, another attractive fairy from this region, which had long before Google and Facebook created a place for socializing and pleasant conversations between people and sometimes for the sad stories of ordinary people going to Balchik nearby to sell their grain or returning from there and craving to meet a soul mate in this rich plain full of unusual characters and longing for something new, something beautiful. It is the “Inn of Sarandovitsa” in the heart of this golden wheat prairie that was symbolically reborn in today’s Albena.

And just like the imaginary Yoknapatawpha is populated with the mythological world of the great American master of literature William Faulkner, just like the mythical Macondo keeps the spirit of Gabriel Garcia Marquez, in the same way Dobrudzha has hidden in its bosom the talent and heroes of Yordan Yovkov, Ivaylo Petrov and the poetic tenderness of Dora Gabe. This “literature triangle” injects a lot of intellectual oxygen into the already rich spirituality of Dobrudzha.

Wherever I may roam the world, I always something similar to my land: whether the raging wind in Argentina’s Patagonia, the fine white wine of the Swiss vineyards on the shores of Lake Geneva down to Lausanne and Vevey, the beautifully arranged vineyards on the Pacific coast of Chile, or the rich land of California, described so heart-warmingly by the powerful pen of John Steinbeck. The spirit of Dobrudzha and the beauty of Albena haunt me everywhere.

By the way, if comparison needs to be made, Dobrudzha is not really a “cousin” of the American Maine. It is more likely to have kinship with California, as my father used to say, without having ever been to America. The rich land, the proximity to the ocean or the sea, the taste for long get-togethers with lots of eating and drinking (but not lemonade), the beauty of people — physical and spiritual, farming and the love for the land, the magnificent wines, the beaches of Southern California and those of Southern Dobrudzha like Albena, all this really conjoins these two coasts, which are otherwise more than 10,000 kilometres away and just as many thousands of books away from each other. But if you put Doc, Danny, Pylon and the other “tramps” from the works of Steinbeck, next to those of Yovkov and Ivaylo Petrov – Albena, Sarandovitsa, Sally Yashar, Valkadin, Zheko the Bon Vivant, etc. – you will notice that not only they, but their literary fathers are like cousins. It is in these invisible spiritual connections where the discreet charm of Dobrudzha and California, of Albena and Monterey, of Balchik and Salinas, where Steinbeck was born, lies.

The other thing that connects them is the line of the Horizon. With a capital letter. A plain has one advantage over mountain forests: it offers in most cases a richer life because of the rich land. It also gives a wider horizon for dreams uninterrupted by spiritual uphills and walls… The broad horizon, the lack of cultural and geographical barriers are another advantage over the mountains… People here quickly learn to look and see “beyond the hills” because there are no hills in Dobrudzha. That’s probably why I may be one of the few Dobrudzha skiers, at least from my generation…  It’s all open: above – the sky, in front of you – the sea, behind you – a green expanse that changes colour according to the season.

In these pandemic and viral times the owners of Albena do wonders to keep the hotels still cosy and quiet; the restaurants – centres of gastronomic temptation, the environment – clean, serene and offering relaxation in our hectic lives. The sports facilities, cultural events and the sweet exhaustion from the Aquapark bring great added value to the resort. But for me, the greatest wealth is the people who work here and who create this “added value” that strongly attracts us every summer to Albena. You cannot find that on Google.

This has probably shaped the spirit and thinking of several generations of Albena managers: since its conception it is architecturally unconventional and free, bringing together the sea and the green hills next to it. The culinary bacchanalia and the modern ecological economy of the resort make it a place where everyone can find an oasis for their soul. This is how we get to the famous maxim of a talented BBC colleague: Jeremy Paxman amicably reminds us that geography very often determines the history of a country, of a region. The look sweeping the distance, the lack of barriers for the eyes probably make boundless both the spirit and the dreams. Dreams without boundaries, pleasure without shores… Who could have guessed that a peninsula  – part of the island of Brabant in Antarctica – was named after Albena. Globalisation…

In Sofia, where I sometimes live, the more cunning sellers of watermelons and melons shout over one another: “Melons from Kavarna! Watermelons from Dobrudzha…” And people buy: dreams are sweet, too. Albena’s guests take this for granted. It is quite interesting to see how some of the neighbours from the north skilfully “load” 10-12 pieces of juicy watermelon into a plate, tired and thirsty from the hot sun on the beach or after a visit to Queen Marie’s Palace in Balchik and the Botanical Garden next to it. Before that, however, they have done everything they could to try the two dozen dishes with which Albena spoils its guests with every day. Because these are dishes based on recipes of our mothers and grandmothers. You can’t find them in any restaurant in the world, even the ones that have a lot of stars… All this, mixed with history and geography, myths and legends of yesterday’s and today’s owners of Albena, conveys a passionate yearning to come back again – to a place where desire never dies. 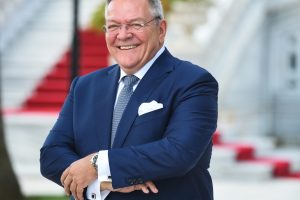