For another year, the focus of the spotlight is Sozopol – one of those magical places that once you visit, you want to come back again and again. The specific atmosphere there instantly captivates you and you fall in love forever.

Nestled in the embrace of the mysterious Strandzha mountain and the Black Sea, Sozopol is one of the most popular resorts in the country. Every year it is visited by thousands of tourists from around the world, which are walking through the narrow cobbled streets, realize that they are actually following the centuries-old history of one of the most ancient cities on the Bulgarian Black Sea coast.

For its impressive 26 centuries of existence, Sozopol went through many stages of development – from political and economic apogee after its founding, through looting and burning during the Roman expansion, then acquired the appearance of an important episcopal center and today – an attractive tourist destination.

Archaeological discoveries take us back 2,600 years, when Miletus settlers founded the ancient city-state of Apollonia and named it after the patron saint of the sun and the arts – the god Apollo. In the first centuries of its existence, the polis flourished – it managed to control a large area between the present-day cities of Pomorie and Ineada, Turkey, and most impressively – minted its own coins, on which the anchor is an inalienable symbol. The distinctive sign, legitimizing Apollonia to the ancient world, still forms the coat of arms of the municipality of Sozopol.

The end of the rise of the city was marked by the Roman expansion in Thrace, when Apollonia was conquered and devastated by the legions of Mark Lucullus. As a trophy, they took to Rome the impressive 13-meter statue of the god Apollo, which was unparalleled in ancient Greece and rose on the present island of St. Kirik.

After the adoption of Christianity as the official religion in the Roman Empire in the IV century, the city was called Sozopolis – the city of salvation. It acquired the appearance and importance of an important administrative and episcopal center. Many new Christian temples have been built, the foundations of the monastery on the island of St. Ivan were laid, where the relics of St. John the Baptist are placed. To protect against barbarian invasions in the V – VI century, Sozopol was fortified with a complex system of fortress walls and towers. Preserved in ruins, as well as restored areas, today can be seen in the southern and southeastern part of the Sozopol peninsula.

In the XI – XIV century the importance of the city as a commercial, religious and cultural center is growing. In the historical chronicles it is mentioned as a rich and densely populated city. The construction of churches and monasteries continues, among which the most famous are the monastery “St. St. Kirik and Julita ”on the island of the same name,“ Assumption ”,“ St. Athanasius ”,“ St. Nicholas the Wonderworker ”and“ St. Apostles ”.

Modern Sozopol – a tourist town that enchants with a unique combination of natural landmarks, ancient history and ancient architecture. The charm of the millennial city and the romance of the South Sea create a unique artistic atmosphere.

BEACHES
The mild climate, the clear sea and the extensive beaches provide wonderful conditions for sea tourism. The entire coastline seems to be designed for relaxation – deep, cozy bays with fine sand alternate with picturesque silhouettes of rocky areas, and the sea breeze cools the summer days. Over 17 km. from the shores of the municipality are occupied by golden sandy beaches, and some of them are holders of the prestigious “blue flag”. The opportunities for practicing different types of water sports are numerous – surfing, water skiing, diving, underwater archeology, fishing (including underwater) and many others.

CULTURAL TOURISM
The urban structure built over the centuries, revealing the stages of development of remarkable human civilizations, turns Sozopol into a real city-museum. Churches and more than 180 revival houses that has been preserved from the 18th to the 19th century, and the leading tourist sites are the Southern Fortress Wall, St. Ivan Island, the Ethnographic Museum, the Art Gallery and the guardian of the Sozopol vampire – the Archaeological Museum.

RELIGIOUS TOURISM
The church temples and chapels in Sozopol bring a unique cultural and spiritual experience for every visitor to the city, and some of them preserve important relics for the Christian world. With a bell tower towering over 22 meters and stunning iconography, the Church of St. Cyril and St. Methodius is home to the relics of St. John the Baptist, and the Church of St. George preserves valuable icons, a fragment of the Holy Cross, the relics of St. Andrew the First Called and St. Nicholas the Wonderworker. Buried in the ground, the Church of the Assumption dates back to the 15th century and to this day has been declared a cultural monument of national importance. Walking through the cobbled streets of Sozopol you will come across many small chapels, shaping the unique appearance of the city.

Rising on the rocky shore and dropping a heavy anchor in the intoxicating waters of the Black Sea, for thousands of years Sozopol jealously guards and develops its cultural traditions, destined to remain forever the “Eternal City of Bulgaria”.

Golden Sands – When a Resort and Nature Park are One 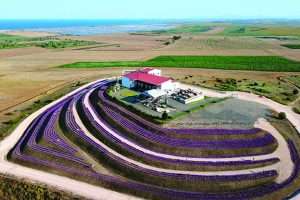